Fraternity and sorority members are among the college students most at risk for continued and excessive substance abuse. 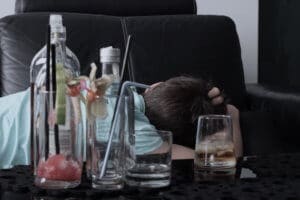 Many substances are abused on campuses with Greek organizations, but alcohol is easily the one that causes the most concern. Binge drinking is far more common among Greeks than among non-affiliated students.

Binge drinking contributes to accidents, sexual assaults, emergency room visits, and deaths on college campuses. It isn’t just the drinkers facing the consequences either. Approximately 83% of Greek housing residents report having suffered as a result of their brothers’ and sisters’ alcohol consumption. Learn more about binge drinking in college.

Members of both fraternities and sororities are at a higher risk for binge drinking and drug use than the rest of the college population. However, research suggests that young men are more likely to drink excessively than young women are. Men are also more likely than women to engage in risky or dangerous activities or feel pressured by male competition.

Because of this, fraternity members (specifically those who are white and under 25) comprise the group of college students at the highest risk of developing a substance abuse problem.

While the Greek system provides social and professional benefits to college students, its members are also much more likely to abuse alcohol and drugs than their non-Greek affiliated peers. There are several possible reasons that being involved with a fraternity or sorority makes students more likely to drink or do drugs, including:

Peer pressure is hard to avoid when it’s around at all times. Students living on campus are more likely to drink or do drugs. This likelihood is even further increased when a student lives in Greek housing.

Fraternities, sororities, and even athletic teams and other clubs may include some form of hazing as part of their membership initiation rituals. Hazing nearly always involves alcohol to some extent. In the worst cases, hazing can lead to alcohol poisoning, accidents, and even death.

In many cases, there are no resident assistants or rule enforcers in Greek housing to keep drinking levels down. Leaders of fraternities and sororities are upperclassmen who are still young people themselves. Additionally, campus officials may be willing to look the other way on Greek-sanctioned activities because of the positive economic impact of having certain fraternities or sororities represented at their school.

Because many college students pledge Greek organizations in the hope of establishing a strong social bond, they can be especially vulnerable to the social pressures that come with membership. If a student believes that binge drinking or drug use will make them seem more fun or more cool, they are more likely to engage in the behavior.

Up to 62% of sorority members admit to drinking heavily compared to only about 41% of college women not in the Greek system. Excessive drinking can lead to abuse of other substances and encourage engagement in risky behaviors.

Sororities can also act as an incubator for self-esteem issues; triggers for emotional trauma may occur during hazing rituals and other negative interactions with sorority sisters. According to a survey, parents of sorority members were 3 times as likely to worry about their daughter’s body image and self-esteem than parents of women students outside of the Greek system.

The Problem With Hazing

Although some hazing rituals may be considered fairly harmless, others can be downright dangerous. Excessive drinking is an all-too-common component of many hazing activities, often with tragic results.

Young men and women may come to college with less experience and lower alcohol tolerances than their older brothers and sisters in the Greek system. Not knowing one’s limits while also deeply wanting to fit in can lead to catastrophe.

A disproportionate amount of alcohol-related deaths within fraternities happen to freshmen. In fact, of the 24 fraternity-related freshmen deaths since 2005, 15 occurred during or after recruiting events or hazing and initiation rituals.

Get Help For Someone You Know

If you or someone you know is in a fraternity or sorority and facing a substance abuse problem, get help as soon as you can. Get in touch with a treatment provider today.