Methamphetamine abuse or meth addiction is a dangerous problem in the United States. More than 14.7 million people have tried it, and almost 100,000 are currently battling meth addiction. Meth is one of the most commonly abused drugs in the world, especially in the American midwest. It is a highly addictive stimulant and is causing an even greater problem than the opioid crisis. The transformations caused by meth in its users can be shocking. In 2005 the U.S. spent about $23.4 billion on methamphetamine abuse.

The prolonged abuse of methamphetamines can destroy an individual’s life. The drug causes serious health issues, disabilities, and failure to keep up with personal responsibilities. What is most shocking is the visible deterioration of a person’s physical appearance. The effects are frightening and can leave users unrecognizable.

Signs of meth addiction include:

This woman’s transition over a decade is terrifying. At first, she has the beginning stages of premature aging. The fat around her face drops from a youthful glow to a heavy jowl due to muscle loss. As the years progress, there is an onset of “meth mouth.” Her teeth seem to be rotting, and there is a massive loss of fat around the mouth and cheeks. After a decade of prolonged use, the individual has lost a severe amount of youth in her face. Her lack of hygiene is also apparent. What’s new is the overly prominent sores on the left side of her face. These lesions are caused by excessive skin-picking and can lead to scarring. 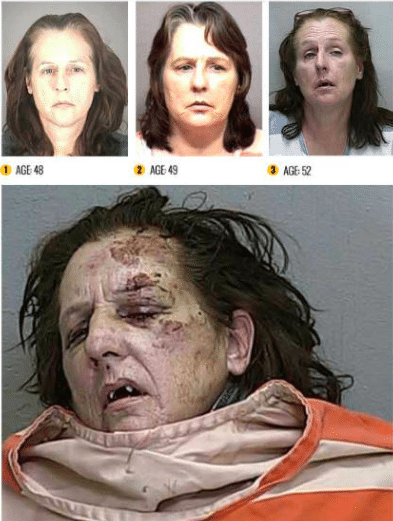 Number 2 on our list is a man whose change is heartbreaking. In the first picture, the individual appears middle-aged. His face has plenty of youth, and he seems to have good hygiene. Fast-forward to 9 years later, and he looks like a completely different person. His face is dry and covered in lesions. What is most shocking is the apparent signs of “meth mouth.” Like many meth users, the skin on his lips is chapped and scabbed. The individual’s mouth is tight and thin. The heavy meth abuse led to dramatic aging. 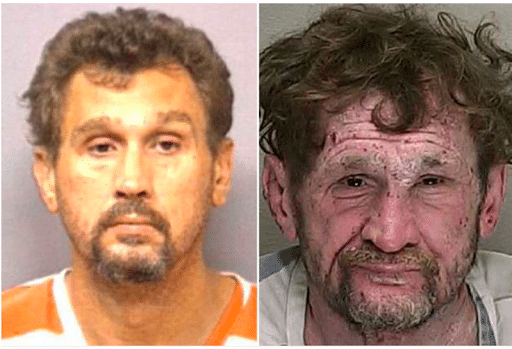 The man appears to be in his early 40s in the first picture. In 7 years, the individual aged drastically. By 2007 the same person was unrecognizable and looked about 20 years older. In his second mugshot, he is pictured with long hair that is shaggy and thinning. His skin is suffering significant fat and muscle loss, making his face appear droopy. The eyes are dull and heavy. Above his forehead and around his face, he has sores. In less than a decade, the chronic use of meth has aged this man about 20 years. 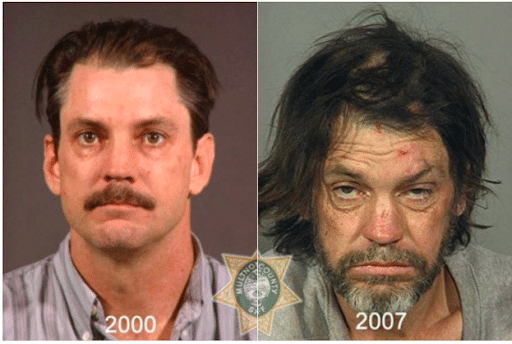 In the first picture, the man appears to be in his 20s but was 36 years old and relatively healthy. Six short years later, the man, now 42, has deep frown lines across his forehead. His face is covered in sores, and his skin looks bruised. The whites of his eyes are red, dull, and appear sad. In a short amount of time, the individual went from looking very young for his age to aging poorly. 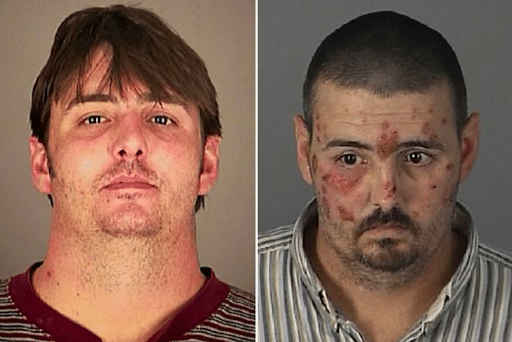 Meth transformations vary, but over the years, chronic users always appear sickly and unkempt. In the first mugshot, the woman who was 29 at the time was already an avid meth user. The early signs of lesions are already showing around her mouth, and her eyes appear hollow. By the time she is 31, her entire face is covered in sores and scars. She has a receding hairline, is graying, and seems thinner. The fat and muscle loss on her face make her seem chiseled. 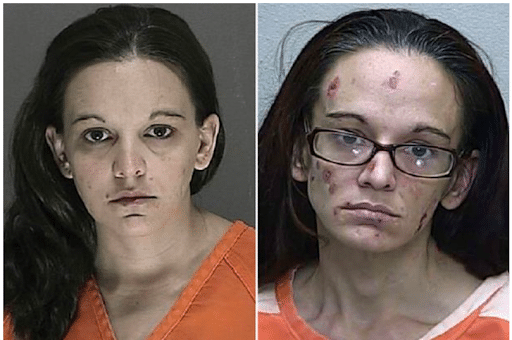 Pictured below is a 5-year meth transformation. In 2003 the individual’s face was blemish-free with only a few fine lines. After a few years, the man’s face loses volume and looks hollow. Black marks and scabs are scattered across his skin. 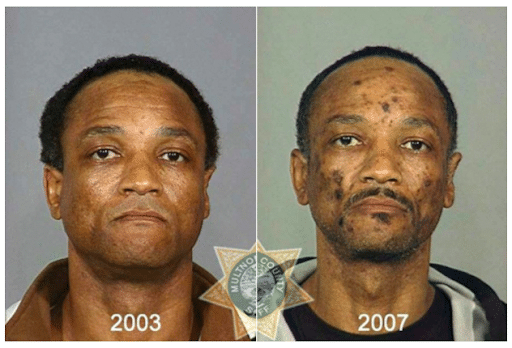 The woman’s face is full of youth and bright in the first picture. Seven years later, her skin is suffering from major fat loss and sagging. Her eyes are shrinking in size and dull. The woman is also in the early stages of “meth mouth.” 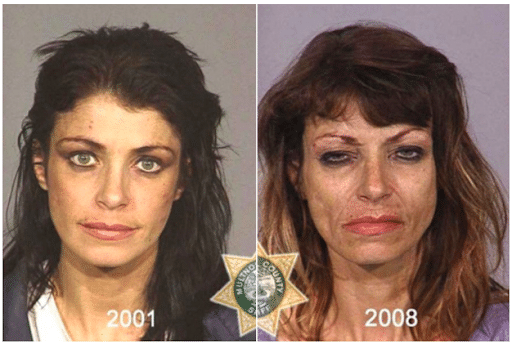 When the first photo was taken, the woman was 22 years old. Her skin was clear and plump. A decade later, at 33, the woman had “meth mouth” caused by the drug’s harsh chemicals. Her cheeks are hollow, and her lips tight. Sores are scattered around her chin. The woman barely resembles the girl she used to be. Even though the pictures are about a decade apart, the woman’s advanced aging is striking. 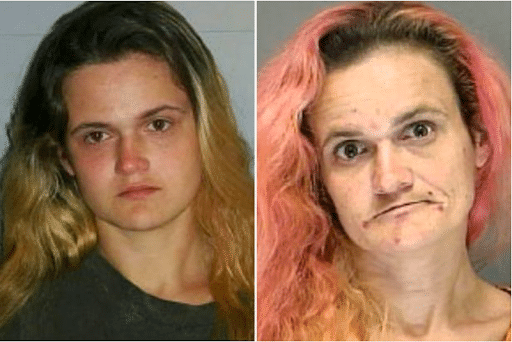 The following pictures are a year apart. In that short amount of time, the woman in the photo’s face completely changed. Her once smooth skin is covered in red sores. Her eyes look tired, and she seems about half a decade older. 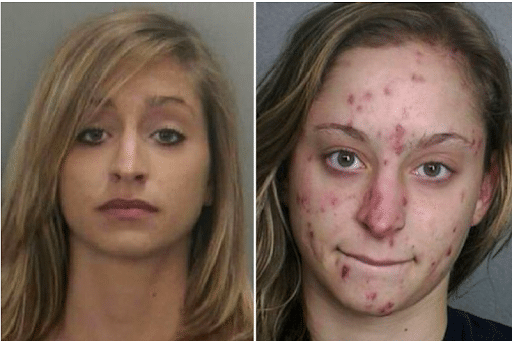 The last pictures are 7 months apart. It takes no time for the red spots and sores around the woman’s face to appear. Her left eye is beginning to droop, and her lips are thinning. 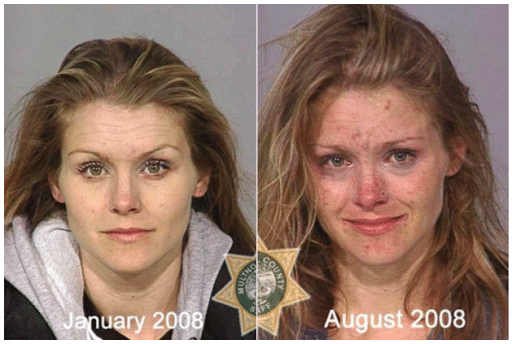 The misuse of meth has serious side effects on its users. It is highly addictive and poses a great threat to society. Out of all the drugs in the United States, meth has the highest association with violence. The people depicted above are individuals that became victims of the potent drug. Their meth transformations are direct signs of addiction and can affect anyone. Though meth addiction is a complex condition, help is still available. Several effective treatments help individuals recover and lead healthy lives. If you or a loved one are battling an addiction, contact a treatment provider to talk about rehab options. No one is immune to the impact of chronic substance abuse, but you do not have to deal with it alone. Get help finding the treatment you deserve today.