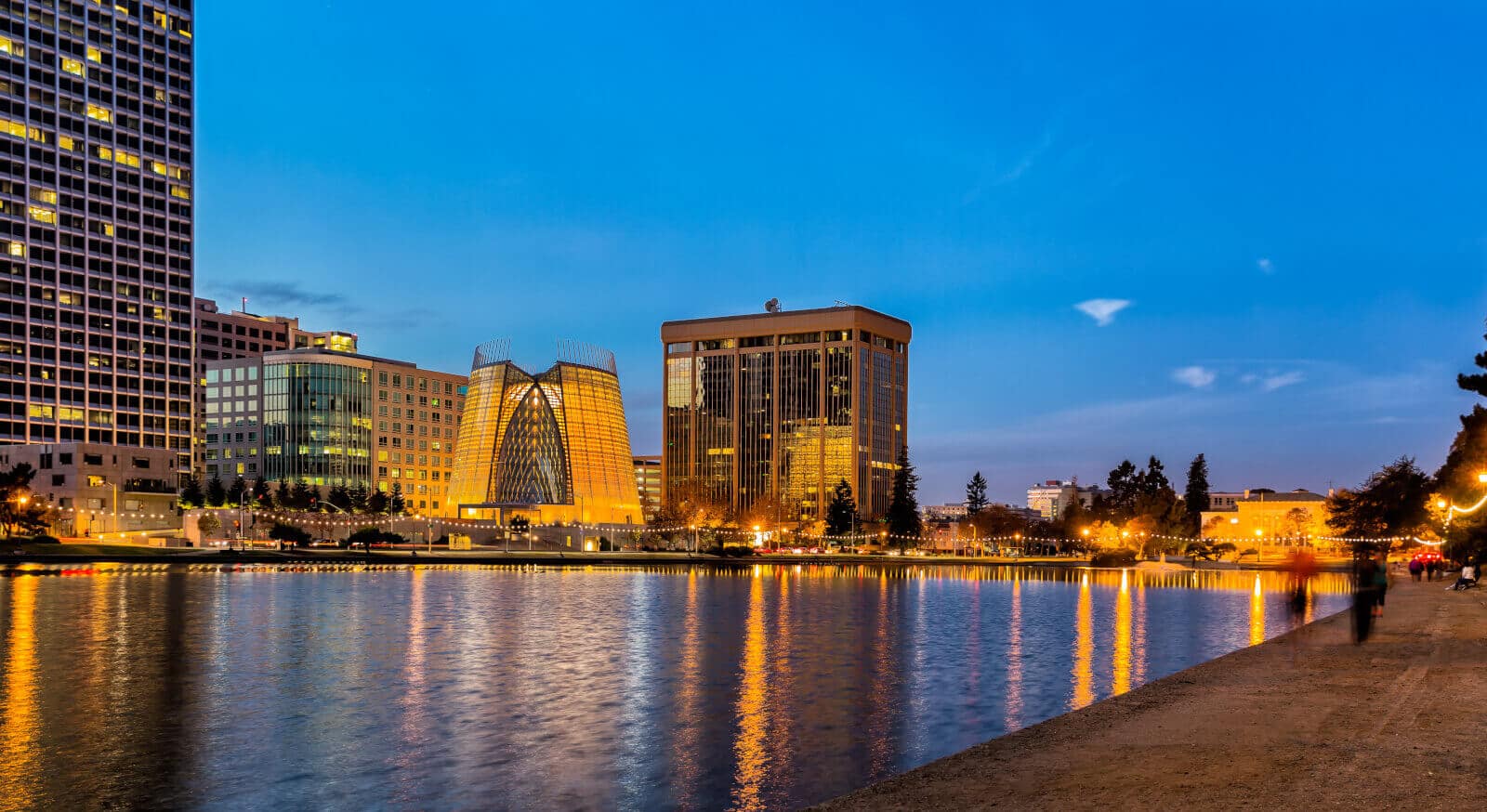 Just across the Bay from San Francisco, Oakland is surrounded by a variety of addiction treatment centers, ranging from government-funded to luxury, private options.

For years, Oakland, California ranked as one of the most dangerous cities in the US thanks to its high violent crime rate stemming from gang violence and drug activity. The most commonly abused illicit substances in Oakland are marijuana, heroin, and prescription opioid painkillers. Heroin in particular contributes to the most hospital visits and overdoses annually. Additionally, heroin-related treatment is dispensed at rates seven times that of other opioids.

The Opioid Epidemic in Oakland

Large numbers of legal, American prescription users turn to street heroin after doctors refuse to keep prescribing painkilling medication. The rising cost of living and the over-reliance of residents on prescription opioid, has resulted in heroin addiction and homelessness for many in the urban city. The increasingly high rates of homelessness and heroin use have since become an issue of public concern. After resources were deployed to one “tent city,” public officials found the abundance of used needles hindered cleanup efforts—there were so many needles that waste management employees could not work in the unsafe conditions.

In Oakland’s Alameda County, there is approximately one opioid prescription written for every two residents. Although the rate of prescription opioid deaths has been lower in the Oakland area compared to national numbers, the overall rate continues to increase annually. Furthermore, Alameda County’s drug deaths are still almost 7 times that of countries like Germany.

The approximate cost of opioid-related hospital visits in 2014 totaled $9.6 million.

In 2015, in a one-night census, officials counted 1,400 homeless individuals.

Two-thirds of opioid-related hospitalizations in 2014 were for patients using public funds.

Located across the Bay from San Francisco, there is a wide variety of addiction treatment options available to Oakland residents. Whether those seeking recovery are looking for luxury rehab centers with diverse amenities or government-funded opportunities close-to-home, the Bay Area has a lot to offer.

Oakland reserves federal funds to provide multiple types of care for those in need; one in four children live in poverty, and 20% of all residents live below the federal poverty level. Alameda County Behavioral Health Care Services (BHCS) works with the social services agency to provide substance use treatment services to all eligible residents. The city also passed Measure Z, setting aside more local resources to combat crime rates, drug use, violence, and homelessness.

Alameda County provides the following substance use treatment services to all residents:

There are also a number of Alcoholic Anonymous and Narcotics Anonymous groups available to promote life-long recovery. Whether it’s in the East Bay, the suburbs, or the greater Alameda County, 12-step groups can aid those suffering from addiction stay on track or simply seek sobriety. Group meetings and group therapy can be especially helpful for those with a substance use disorder to build relationships, trust, and maintain a sober network.

If you’re ready to start your path to recovery, talk to a treatment provider now.

To all students, professional and confidential counseling is available free of charge. In meeting the challenges of a creative academic environment and cope with personal issues, counseling can help students and assist them. Brief individual therapy, crisis intervention, assessments, and referrals to community resources is offered at Counseling Services.

No drawback is simply too huge or too tiny. Our extremely skilled and culturally competent team is here to serve you with a huge vary of programs. Counseling and Psychological Services (CPS) offers short term counseling for tutorial, career and individual problems. There’s no charge to get started, and every registered students can access services no matter of their insurance arrange. We are dedicated for supporting your educational success and self-improvement as a student at UC Berkeley.

Holy Names University students receive classified counseling and at free of cost from Counseling and Psychological Services. By taking part in counseling Services activities, students can: Develop capability for cognizance, each in person and as members of a spirited and various communities. Explore thoughts and feelings regarding what’s operating and not operating. Learn to deal with a spread of problems touching health and well-being. Apply new ways in which of understanding and being within the world.

Counseling & Psychological Services (CAPS) offers periodic workshops and support groups to students. Confidential individual and crisis counselling is also available to students who would like to speak to someone regarding their personal concerns.

SFAI provides free, short-term counselling with a licensed clinical social worker or a supervised master’s-level clinical intern. We provide you with a space to talk about your worries, hopes, fears, goals, and strengths. Transitions and adjustments, overwhelming sadness, anxiety, problematic use of alcohol or drugs, trouble with eating, and interpersonal or academic problems are some of the challenges for which people come to counseling for support. They might also come to talk through a frustrating critique, tension with a loved-one, self-doubt, feeling stuck or unfulfilled, or simply with a hope for support in examining their lives.

We provide short-term counseling services to help students achieve and maintain a sense of well-being, at SFCM. Counseling can often lead to better interpersonal relationships, improved academic performance, solutions to specific problems, reductions in the student’s feelings of distress, and an overall expansion of the student’s potential. The student and counselor work together to define goals and explore strategies in counselling. Issues such as stress, relationship difficulties, and depression or anxiety are offered at SFCM.

Saint Mary’s Counseling and Psychological Services (CAPS) feels emphatically about working in a mutual way and thus every choice about the counseling procedure will be talked about as carefully and as transparently as could be expected under the circumstances. Your admission counselor will become more acquainted with you and get some information about your reason(s) for going to the counseling center. They will require some time in these first meetings to discuss about counseling and will share what they feel would be the most ideal way to approach.

Counseling and Psychological Services (CAPS) tries to help students in creating more noteworthy self-comprehension and help settle issues that meddle with their ideal individual functioning. It is ordinary to encounter tuning issues, particularly during periods of transition. CAPS gives individual, couple and group counseling for students too counsel and effort services to help students’ wellbeing and achievement

At City College of San Francisco along with other 5 diverse Retention Programs housed underneath the Multi-Cultural Retention Services Department there are many counseling divisions are accessible to serve you. The counselors in these numerous divisions are all a part of a COUNSELING TEAM and are all here to assist you discover your approach through City College and to help you in finishing your academic goals.

SF State’s CMHC program is distinctively designed to train college students to work within the behavioral health staff. Medical intellectual fitness counselors work with individuals from a huge age range such as transition-age youths to older adults. Our college students obtain the counseling, case control, advocacy and fitness advertising understanding and capabilities vital to work with the most at-risk, susceptible behavioral health populations which include (however now not restrained to) the ones from traditionally marginalized communities, those with immobilize and/or co-taking place fitness/behavioral fitness conditions, people with suffering, homelessness, substance use, and different persistent stress-associated histories, and people going through every day social injustices, unfairness and micro belligerence.

The Chabot College Counseling Division offers indispensable support services to a various student population by giving a variety of programs, classes and counseling services. Please visit our official college website or email us at cc-counseling@chabotcollege.edu any assistance.

Registered student of Carrington College can access ASPIRE a classified 24*7 service. One telephone call will place you involved with certified counselor or psychological wellbeing professional who will facilitate along with your own, lawful, family, monetary, or college considerations.

We wish you to make the best use of your time at Skyline College; meeting with a counselor will facilitate you and make sure you to design an action plan that works for you. As Skyline College’s educational counselors are here to give steering and knowledge to empower you to succeed and meet your academic objectives.

Having a person in our life that can assist us positioned a viewpoint and make choices with a view to beautify our lives and relationships. Counseling can cope with problems consisting of relationships, school, take a look at tension, look at problems, suicidal tendency, family conflict, alcohol and drug use, stress and trendy feelings of being “trapped.” Sometimes you may not have a specific concern, but simply want to have a conversation with someone. Therefore our program presents supportive surroundings where you may discover, alternate and grow at your own pace, based to your very own desires and dreams. Customers were helped significantly by using the service which the counselors have provided. As we all have an array of issues that could have an effect on how we deal with the competitive world.

If your are eligible for quite one education profit, opt for the profit that’s right for you, as a result of you can’t receive payment under one profit program at a time. Therefore students are inspired to satisfy with counselors well before of registration. As you study your education edges, detain mind that every program offers totally different amounts of monetary help and has different eligibility needs.

To assist students with their specific educational goals counseling services offers a variety of workshops. The College Orientation is required of all new and returning students schedule is available on our Event Calendar page. These workshops are designed for students to be active and informed participants in their education.

Counseling Services are designed to provide a vast range of support to provide assistance to currently registered students. We attempt to offer services that reflect our strong commitment. It thereby helps individual needs of all students.

To currently registered Menlo students, the MHS Clinic is dedicated to providing a broad range of support. The MHS Clinic is located in Student Affairs. Our staff develops evidence-based treatment plans tailored to each individual’s unique background and needs, by working together with students, our campus partners, and community providers. Here at Menlo, we strive to provide services that reflect our strong commitment to diversity and to the individual needs of all students. MHS also functions as a training facility as each academic year graduate practicum students complete their doctoral training in clinical psychology at the clinic. From the Director of MHS they receive supervision.

Other Cities in California