The Influence Of Social Media On Teen Drug Use

The Relationship Between Social Media And Teen Drug Use

Young people experimenting with drugs and alcohol is nothing new; however, social networking sites are offering new and dangerous opportunities for adolescents to be exposed to drugs. Teens are uniquely vulnerable to the effects of what they see on social media, as this age group is highly susceptible to peer influences and pressure. Sites like Instagram, Facebook, and Snapchat provide an environment where kids are exposed to famous and normal people alike engaging in risky behaviors involving drugs and alcohol.

Celebrities such as Justin Bieber, Drake, and Cardi B consistently post pictures of themselves drinking and getting high on a variety of platforms, and that’s starting to influence the young people that are viewing it. Additionally, adolescents are not only exposed to celebrities and “influencers” engaging in this behavior, but also their friends and families. This kind of content normalizes and glamorizes behavior such as illicit and prescription drug use as well as binge drinking, making teens wrongly believe it’s appropriate to do the same.

A study conducted by the National Center on Addiction and Substance Abuse at Columbia University found that teenagers who regularly use popular social media outlets were more likely to drink, use drugs, and buy tobacco than adolescents who either did not use social media or used it less frequently. The survey asked 2,000 adolescents about their drug use and social media habits and 70% said that they use social media on any given day. Researchers found that, compared to nonusers or infrequent users of social media, this group was:

In addition to drug exposure through marketing and advertising, social media is the catalyst for many mental health problems that can lead to substance abuse. Social media perpetuates social comparison in a world where everything is curated, which is particularly problematic for teens who are more prone to depressive cognitions in the face of social comparison. Social media use is associated with mental health issues including depression, sleep disturbance, and disordered eating among young people.

Rates Of Teen Social Media Use

Social media use amongst teens is nearly universal today. About 92% of adolescent users report checking social networking sites more than once a day. Facebook, Instagram, and Snapchat are the top social media platforms for young adults. 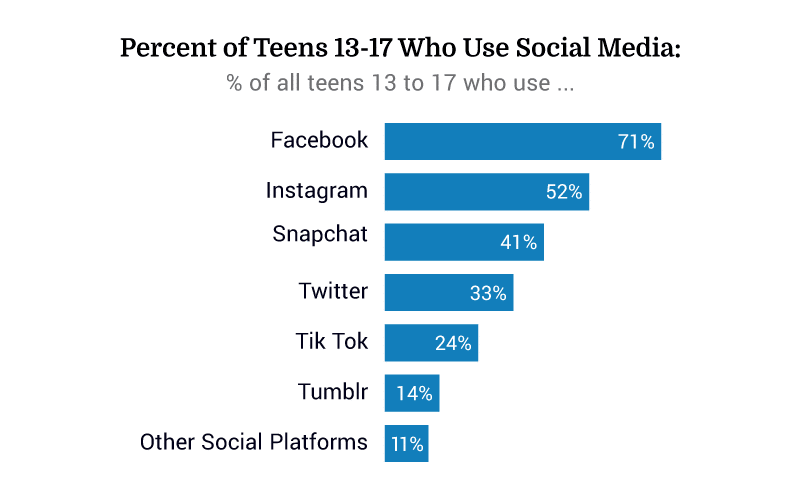 Social Media Ads And #FOMO Can Lead To Drug Use

For young, impressionable people, seeing their friends and family in Facebook posts or Instagram pictures having fun while partying can tempt them to make risky choices in an effort to fit in. For others, it can depress them to the point that they turn to drugs or alcohol for solace.

Recent studies show that 75% of teenagers seeing photos on social networking sites of other young people smoking weed or drinking alcohol encourages them to experiment in the same way.

Although drinking and smoking amongst teens has been an age-old issue, social media has begun to desensitize children to these activities at a younger age — 90% of the kids surveyed saw these types of photos of their peers online before they were even 16 years old. Nearly half of all teens who have seen such pictures perceived that the kids in the photos “are having a good time.” Teens who have come across these kinds of photos are 4 times more likely to have used marijuana and 3 times more likely to have consumed alcohol compared to kids who had not viewed this type of picture.

In addition to being exposed to these acts by their peers, the ads found on social media can also encourage underage drinking and drug use. Tobacco, electronic cigarettes (especially those marketed by Juul), and alcohol manufacturers have widely integrated social media platforms into marketing strategies that are fully accessible to teens. Through the use of social media advertising, these industries are able to market to youth, despite the fact that direct marketing to minors is against the law.

A study performed by Michigan State University found that people who were shown Facebook ads promoting beer were more likely to indulge in an alcoholic beverage than those who viewed bottled water ads. After seeing the Facebook ads, the 121 test subjects were given a choice between receiving a gift card for a coffee shop or a bar as compensation for their participation in the study. While 73% of those who saw the beer ads chose the bar gift certificate, only 55% of those who viewed water ads selected the bar as well. Exposure to substance use imagery is associated with subsequent onset in use, which is why there are limitations on advertising such products in the media to minors; however, social media is proving harder to regulate.

Celebrities also promote drug and alcohol use on social media sites, which young people see and are often encouraged by. Celebrity advertising makes smoking and drinking seem like fun, cool activities, which can subtly pressure teens to experiment with the same products.  Many digital ads use celebrities, music industry personnel, and attractive young models to promote their products – all of which have been shown to be effective marketing strategies among children and teenagers. In fact, research has revealed that advertising may be responsible for up to 30% of adolescent tobacco and alcohol use.

Research has shown that there is an undeniable link between social media use, negative mental health, and low self-esteem – all of which can drive underage substance use. When teens are struggling with emotional problems, they will often turn to drugs or alcohol as a coping mechanism to help manage their difficult feelings. Frequently checking social media platforms and comparing oneself to others can make young people feel increasingly unhappy and isolated.

Social media not only can cause unhappiness and a general dissatisfaction with life in users, but also increase the risk of developing mental health issues such as anxiety and depression. In fact, an estimated 27% of children who spend 3 or more hours a day on social media exhibit symptoms of poor mental health. Kids who are depressed or suffer from anxiety (both of which are often exacerbated by social media use) may then attempt to use alcohol or other drugs to cheer themselves up.

Children with adolescent depression know there’s something wrong with them. They’re not taking pleasure in things; they’re not feeling happy. So if their peers are offering a drug that makes them happy, that’s often the first thing they turn to.

In addition to feelings of social isolation and depression, social media has also been found to be associated with negative body image in young adults. The ongoing exposure to unrealistic beauty standards through visual sites like Instagram can affect how teenagers perceive themselves and cause them to develop low self-esteem or eating disorders. Much like adolescent depression, individuals with low self-esteem may have trouble overcoming negative thoughts and feelings. Subsequently, in an effort to forget or change those feelings, they turn to drugs or alcohol as means of escape. Substance use can seemingly help to quiet the negative thoughts in young users with poor mental health. However, self-medicating with drugs and alcohol only temporarily alleviates those symptoms, and chronic use actually makes them worse.

Talk To Your Kids And Monitor Social Media Use

Social media is providing increased opportunities for both the marketing and display of risky behaviors regarding drugs and alcohol for young people. With social media increasingly integrated into the lives of today’s teens, what they view on these sites is more important than ever.

The best way to protect your children from these influences is by having open communication and educating them on the risks of substance abuse. However, if your child is struggling with excessive alcohol or drug use, simply talking to them might not be enough and may require professional help. If you’re worried about the path that your teen is headed down, contact treatment provider and learn about treatment options today.

Get support for social media addiction from a licensed therapist from BetterHelp.

Take the quiz and get matched with a therapist.

Many college students are using “study drugs” that can be dangerous, addictive, illegal and even fatal. Learn more about this disturbing trend.

What Do Teens Need To Know About Substance Abuse?

One of the biggest concerns many teens find themselves facing is substance abuse, whether involving themselves, a family member, or a close friend

Do I Have A Social Media Addiction?

Answer these brief questions to learn if you have a social media addiction, and find ways you can regain control.